You are here: Home / Media

Easy to follow explanation and how the channeling stocks theory works. Step by Step instructions. Regardless of one's experience in the stock market, a must see video.

Are you looking for stocks in a horizontal price channel? If you don't want to do the work on your own, you might consider the services of this website. But is it worth $10 a month to have someone else do your homework and send you 12 new charts each week?

When I first visited the website, I thought I wouldn't gain much out of it. Since it's a subscription service, I called them up and requested a complimentary account. My call was answered by one of the website's creators, although I didn't know it at the time. I started my usual train of questions, which included, "What are you doing to find the channels?" I expected to hear about the black-box, carry-to-my-grave, all-encompassing holy grail of price channel secret solutions.

But that's not what I got. The reply was a simple, "We look for chart patterns." Channelingstocks.com looks for a volatility of 10% to cover the support/resistance range, along with average daily volumes of 50,000 shares or more. The bid/ask spread should be a small portion of the support/resistance range, and if the spread is small, the average daily volume can go below 50,000 shares per day. When I examined its choices, I also found the website's powers-that-be look for equities that have gone through a peak or peaks. Not bad for people who have only been studying charts for a few years.

If you had done this on your own, you might have made the same choices; then again, you might not. The website displays some recent successful examples that seem typical, based on looking at some 30-plus recommendations that have been made for subscribers. One example is the Franklin Covey (FC) displayed in Figure 1. According to the website, this trade brought in a profit of $517.24. You won't find the support and resistance levels for this successful trade on the site, but based on a stop-loss order at $6.25 and a sell order at $8, you can see the likely choice for support is FC = $6.75, or possibly FC = $6.50 (solid and dashed blue lines), and resistance is FC = $8.00 (red line).

The vertical line in Figure 1 represents the date of the chart at the site, which in this case is April 27, 2001. A glance at the price history over the past year might have you thinking the price channel looks suspect. However, if you step back and look at the chart of FC over three years, the website's price channel looks more accurate (Figure 2). If you had followed its trading advice, you would have confirmed the upswing that started on May 8, 2001, on or around May 17 and bought at $7 or $7.25. And of course with a posting on or around April 27, the June dive would have been unknown. Channelingstocks.com checks the spread before making a recommendation, but keep in mind some choices lack liquidity. (Channeling stocks.com doesn't see a problem in the bid/ask spread.) In order to make the profit they propose, you would have bought close to 1,000 shares, which would almost make you a market-maker in this stock. 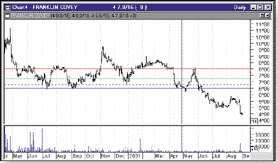 Figure 1: Franklin Covey (FC). Based on the advice of channelingstocks.com, the red line indicates resistance and the exit for long positions, while the green line represents the entry point for long positions. Blue lines are alternatives for support. 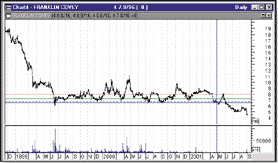 The trading advice provided is sound. It tells you to verify entry for a long position by seeing that an upswing has started, to use protective stops, and to get out when resistance is expected. I would have been long on only two of the first 12 stocks I looked at using their trading suggestions. Of their latest set of 12 recommendations (August 24, 2001), two have turned down, nine are moving sideways, and one has gapped up. Given the bearishness of the current market, this is pretty much what I would have expected.

Channelingstocks.com is an honest effort, using reasonable criteria, to find stocks in a horizontal price channel. For $10 per month (based on annual rate) the website will pick 12 stocks per week for you to consider, and if it's worth $10 a month to have someone save you a few hours of work each week, then think seriously about this site.

Off The Charts in My Midwest

It sounds like a pitch for a feel-good movie. Two buddies from Port Washington, Wis.—a small lakefront community about 25 miles north of Milwaukee—start an Internet business in their garage based on an obscure investing idea. The Hollywood version could be sold as Tim and Tim, a feel-good story that just happens to be true to life.

Tim Desotell—the numbers guy—owned a local deli and frozen custard shop, while Tim Thompson—the computer dude—was a telecommunications operations manager eager to be his own boss. The pair had a “eureka moment” in Desotell’s garage when 19 out of 20 stocks they picked with a new method became winners, so they pooled $25,000 out of their own pockets to design a Web site. Then, they drained their 401(k) accounts and plunked down another $25,000 to produce a high-quality TV commercial. On the eve of the new millennium, just before the tech investing bubble popped, Channeling Stocks.com was born.

Thompson, president and CEO, says he and his partner never bought into the dot-com era thinking, “build a Web site and they would come.”

“Buying space on search engines, which was so hot at the time, never worked for us,” he says. “We wanted to find customers through local television advertising. Once CNBC asked us to go national with our spots (the first one ran Dec. 18, 2001), we knew we had a viable business.”

Channeling Stocks.com started seven years ago with a handful of clients. Now, its Web site has a subscriber base in the tens of thousands and annual revenue growth of 15 percent. They’ve become advertising darlings with CNBC, the industry’s gold standard for financial news; the network maintains an in-house account executive to help tailor placement across a myriad of shows. Since its inception, Channeling Stocks has spent more than $2.2 million to advertise its product, 90 percent of which goes to on-air sources like CNBC, Bloomberg Television and CNN’s financial network. They recently expanded advertising slots to include programming after the markets have closed for the day. Early this year, the Web site extended its service to cover both U.K. and Canadian financial markets.

Ask the two Tims how they discovered the channeling method, and they’re not even sure they can remember, insisting the strategy dates back to the days of real ticker tape. No matter. Every week since they launched, the Web site has delivered 12 stocks every week except one, culled from more than 18,000 on U.S. exchanges; it charts the stocks’ historic high and low selling points, creating a “channel” for investors to trade in a compressed timeframe. The key, which bucks conventional wisdom that stocks are a buy-and-hold affair, hinges upon traders having a sell-off point before the transaction begins. Costs are reasonable: Subscribers can sign up for $159.95 per year ($19.95 for a monthly rate), and cancel their subscription at any time. Six full-time employees, who use material from Stockcharts.com as their base, compile the 12 weekly stocks.

Thompson is careful to point out the company is not affiliated with any brokerage or money management firm, and is selling “tools for financial research,” not “recommendations.” He says anyone can find the information for which he charges—you just need about 70 free hours per week.

Joe Janson, 50, is a typical subscriber. “It was the first time I had an approach that was clear and simple; it made sense,” Janson says. “I go in knowing what my sell point is and where the stock will likely meet resistance and head back down into the channel. I put in a stop-loss order at the same time as my buy and sell orders to maintain the channel’s integrity. The times that I lose money are when I deviate from my business plan.”

Janson initially used a full-service brokerage firm to handle his investments. Disillusioned by high trading fees and underperforming mutual funds, he began trading on his own, but felt like he was lacking information. Since 2003, the year Janson became a Channeling Stocks.com subscriber, he’s earned 25 to 30 percent returns, including losses. Recent winners, like Applied Digital, Ciena Corp. and Toys “R” Us, all netted less than $1,000 per trade.

Rob Steva, a CNBC account executive based in Chicago, says Channeling Stocks.com has found a successful niche with the network because of direct access traders who, like Janson, are hungry for solid information. “The whole notion of Channeling Stocks.com is to empower [the average trader] to make money,” Steva says.

But it hasn’t been all smooth sailing for the two Tims. When the Web site launched, industry experts mocked the theory for being too simplistic; brokers cautioned investors against embracing the strategy. Then, there were the cyber-squatters, who registered misspellings of the Web site’s name with the hopes of pilfering customers. “They preyed on people who saw our TV commercials,” Thompson recalls. “We bought up as many similar domain names as we could but still missed a few. All Web-based firms need to be on guard against such unscrupulous practices.”

Once the cyber-squatters were vanquished, the firm’s biggest problem was complacency. “We realized we needed a push, so we added Canadian and London markets to the site,” says Thompson. “That took a year from concept to execution.”

Thompson further says that he and Desotell stopped investing in the market themselves to cleanse away any hint of impropriety. They still get daily e-mails asking if the size of their subscriber base has the potential to influence any of the stocks that channel in their weekly deliveries—they assure all that it does not.

Thompson gets a big laugh when he compares such e-mails to the early days. “Back then every new subscriber was a geography lesson for my daughter,” Thompson says. “I set up a map and told her someone from Salt Lake City just signed up. She’d take a pushpin and find the location. Slowly, the map was filled, one subscriber at a time.”

How to Jump-Start your investments

Start at the end.

Figure out where you want to be and work backwards. If you start at the bottom of the pyramid, you can plan what your product will cost, who will buy it and who you need to tell about it. This way, you’ll minimize all the surprises.

Create the need before it exists.

“I got an e-mail from a nurse telling me she’d signed up because it looked so easy to do, even though she had no investing experience,” Thompson says. “That is the type of client we had hoped to reach.”

Don’t be influenced by too many “experts.”

What good is embracing someone else’s definition of what works, if it takes you further away from the original vision for the company?

Do your due diligence.

Technical indicators to determine a stock’s worthiness are fine, according to Thompson, but they often confirm the legwork investors need to do in advance.

Paper trade first before subscribing to any Internet site.

It’s the cheapest education investors can get, regardless of market experience.

Find out which stocks are trading in the Channel for as low as $9.95 per month!

Get to the practice trading page and start your paper trading today. Remember that you will not "buy" every stock because you won't be "buying" it unless it is establishing itself above the support level. Be honest with yourself and use numbers that you would use if it was real money and not just paper trading.